Medical Debts and How to Fight Them 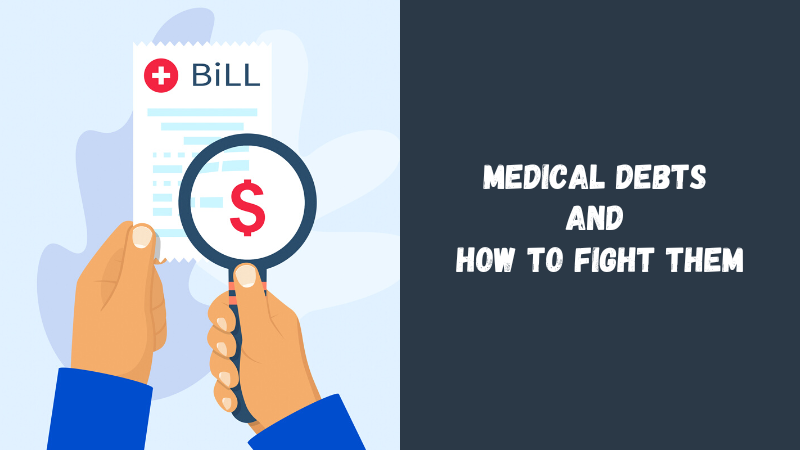 According to a study by the American Journal of Public Health, 37% of all personal bankruptcies in the US are related to medical debt. Another study by the National Council on Aging found that more than half of Americans say medical debt is the biggest problem older people face.

The high cost of medicine in the United States is well known. You can proudly proclaim as much as you like: “We have the most advanced medicine in the world!”, But “advanced” and “affordable” are two different things. Perhaps in America, medical science has more achievements to its credit than anywhere else in the world. Perhaps the United States is better equipped with sophisticated medical equipment than anywhere else. You may not have to wait long here to get to a specialist or for an examination, unlike in other developed countries where there is universal public health insurance. But they have this expectation – with a caveat: in the absence of urgent indications. In urgent cases, the state pays for treatment in private clinics, if necessary.

All of the above is important, but not the most important. The main thing is the availability of treatment, which is determined primarily by its cost. Tens of millions of Americans cannot use the most advanced medicine because they “fall between two chairs”: they are either not rich enough or poor enough. And we are talking not only about the “working poor”, but also about the middle class.

A poll by Gallup Poll and NGO West Health found that Americans borrowed $88 billion in 2018 to pay for medical expenses. This is the annual budget of a state such as the Czech Republic or Ireland. Paying off medical debts is a heavy burden, but experts console you: this burden can be eased. Because from a legal point of view, health-related debt is different from all other debts.

The largest bills are generated in cases of hospitalization. But keep in mind: most American hospitals allow patients to apply for financial assistance (“financial assistance” or “charity care”) directly in the hospital, where there is almost always a corresponding department. If the hospital served “by ambulance” the poor who has no money, “Emergency Medicaid” is issued for him or the expense is written off as irretrievable losses. And if you have something and you don’t want it taken away from you, contact the financial aid department for “charity care”.

If a hospital is a non-profit hospital, it must provide each patient with a description of its financial assistance program. Commercial hospitals also have such programs. And if there is no special program, you can still apply for “charity care”.

How much the hospital will accommodate you depends on your income. For example, MedStar Health, a non-profit hospital system that includes 10 hospitals in Maryland and the District of Columbia, provides free medical care (as determined by a physician) to uninsured patients whose annual income does not exceed two times the federal poverty level (as of 2020). This level is $16,910 for a family of two, $21,330 for three, and $25,750 for four: multiply these figures by two). For those whose income is between two and four times the federal poverty level, discounts are available on a sliding scale.

Even if you do not fit into the limits, ask for help, and the hospital may meet you halfway – in one way or another. Especially if your medical debt is a significant portion (say, a quarter or a third) of your income. You may not be able to apply for financial assistance right away: non-profit hospitals allow you to apply for up to eight months after treatment.

It is also often possible to negotiate with medical offices – for example, to pay in installments a debt for outpatient treatment. Feel free to ask.

And even if your debt has already been transferred to a collection agency, do not despair. Firstly, you have the right to demand from collectors to provide evidence of your debt: how much, where, when, to whom and for what you should have paid and did not pay. Secondly, you can apply for “charity care”, even while under the collection “cap”.

It is common for people to be eligible for Medicaid but not aware of it. If this suddenly turns out after the fact, when the debt for medicine has already formed, a very part of this debt can be covered by Medicaid retroactively (different states may have different laws on this matter).

There are various public organizations that help certain groups of the population (for example, patients with oncology or diabetes). They can also help in a difficult financial situation. You can find such organizations in your area through the National Financial Resource Directory.

There is another interesting thing: medical credit cards. Some health care providers offer these cards to pay off your debt on a monthly basis. These cards are often interest-free for some initial period – say, for the first year or two years. Or you may not be charged interest for the entire term of the debt, if you pay a certain amount in full every month – for example, $200.

Remember, however, that having a medical credit card makes it impossible for you to apply for financial assistance. Do not forget also that this is a credit card, albeit a medical one, with all the ensuing consequences. If you make payment late, you will be fined.

Crowdfunding and other little-known options

There are other ways to deal with medical debt. You can try to collect voluntary donations to pay bills for treatment. This is called crowdfunding, or “crowd financing”. In order for the “crowd” to fund your treatment, it is best to contact them through a specialized website – and there are quite a few of them: GoFundMe, FundRazr, Plumfund, and others.

The GoFundMe site alone runs 250,000 medical fundraisers every year (this and other similar sites allow fundraising for any purpose, but medicine accounts for more than 40% of their turnover). However, do not flatter yourself: far from all cases, crowdfunding helps to raise the required amount. So, on the GoFundMe website, the collected donations on average cover 40% of the required amount. Those in whose favor the fundraising is carried out can receive them, even if the money is not collected in full.

Previously, there was another financial lifesaver – a bank loan for real estate- a home equity line of credit (HELOC). Such a loan could be taken up to the difference between the market value of the house and the outstanding debts for it. Since 2018, Trump’s tax reform has come into force, according to which interest on HELOC can only be deducted from taxes if the loan is spent on rebuilding or renovating a house.

You can also borrow money from your retirement savings under certain conditions. In fact, they can’t be touched until 59½: if you take money out of your 401(k) or “traditional” IRA, you’ll be fined 10% of the amount you took, plus income tax. But you can ask for an exemption from the penalty due to exceptionally difficult circumstances – medical debt is one of those. However, when the fine is lifted, most often it only applies to the amount up to a certain ceiling, and the rest is still fined.

There are also 401(k) plans that allow you to borrow money from your account, they are usually paid back within five years with interest. But if you do not meet these five years, then you will be fined.

Let’s not forget about the most extreme remedy – personal bankruptcy. If the stranglehold of medical debt has dragged on so tightly that it cannot be weakened by any means, then you can resort to bankruptcy can – it will give a respite from the attacks of creditors and collectors. In America, personal bankruptcy is a fairly common occurrence. Among respondents to the Gallup/West Health survey discussed above, 45% see themselves as going bankrupt if something serious happens to their health that requires unsustainable expenses.

Bankruptcy can be carried out either under article 7, or under article 13 of the Bankruptcy Code (respectively, “Liquidation” and “Restructuring”). If the debtor has a minimum of income, and there are practically no assets, then Article 7 makes sense, which cleanly eliminates all debts, and there is no need to return anything to anyone. If the debtor has some money and property, then, in order not to take everything at once, it is necessary to file for bankruptcy under the 13th article and agree (with the approval of a special bankruptcy judge) on the gradual payment of the debt in one volume or another.

But keep in mind that bankruptcy is not only debt relief but also a heavy blow to your credit score. Your credit file will keep a bankruptcy record for 10 years. Getting any loan during this period will be extremely difficult or impossible.

In any case, as we can see, there are different options: medical debt is not the end of the world.